On Friday morning, I took part in a rainbow parade!

No, it had nothing to do with gay pride, it was simply about colour. How did this happen? Well each month, I attend a breakfast lecture series called Creative Mornings. It’s my favourite Friday morning of the month because I wake up early and take the East River ferry down to DUMBO, sit in the gorgeous Galapagos Art Space, eat croissants, and meet new creative types. It’s the ultimate blah-buster.

Friday’s guest speaker was Jessi Arrington, artist and colour-lover. Everyone was instructed to dress in one colour (I was yellow) and we sat in groups with our fellow colour-wearers. At the end of her very cute and upbeat lecture, she informed us we were going to have a little parade around the neighbourhood, led by a marching band! 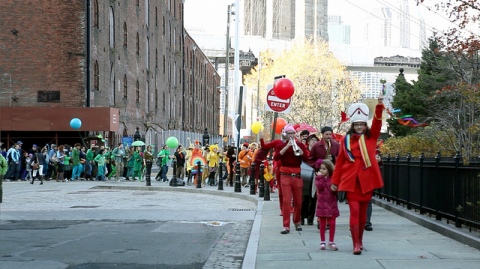 I had so much fun! The whole thing was so absurd, but well-organized and everyone really committed. On-lookers stopped in the street to take photos of the parade on their phones, cars honked at us, and office workers were pressed up against their windows to look down and watch our impromptu march.

I’m the “yellow” with the black hat. My new friend Emily is beside me in the big yellow wig!

We marched to the “hole” under the bridge and lit sparklers. Then we turned around to have a reverse-rainbow parade back to the venue. So many smiles for 9:30 am! But really, how could you not?

It had been way too long since I partook in something so silly. This needs to happen more often!

§ 5 Responses to A Rainbow Parade!

You are currently reading A Rainbow Parade! at I want to go to there.