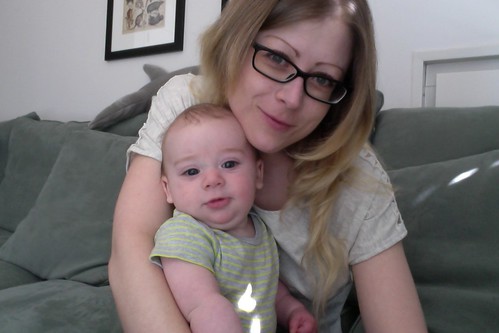 This just in: Henry finally goes down for his last nap of the day and I second guess making myself a snack because I don’t want to waste this time to relax standing up.

Talk about things I never expected to happen.

It’s the second annual International Day of Happiness! I couldn’t think of a better day in which to participate. Although I started off the day a little sore and tired, I think this is a perfect moment to practice gratitude (and list-making!).

Ten things that make me happy:

Also, if you’re not doing anything tonight, I highly suggest you watch the documentary Happy.

The Many Faces of Henry Storch

All that in just a few minutes, at just 4 1/2 months old, all inspired by his exersaucer/”Wheel of Neglect”.

How To Have A Great Friday Morning

When he goes down for a nap, head to here to do this:

Walk home, listening to this:

Stop for one of these:

And finally, come home to this:

I really couldn’t ask for a better morning.

I’m happy to say goodbye to what was possibly the most challenging four months of my life and hello to the post-fourth trimester, new and improved Henry!

As I touched on in my last post, the first four months of Henry’s life were amazing and life-changing, but having a newborn baby is hard. Your life is turned upside down and all you can think about is doing the best you can, 24/7, for this tiny creature whose very existence is dependent on you. And I’ve mentioned this before, but as a breastfeeding mother, you just DON’T SLEEP.

However, things are officially completely wonderful. Henry has a whole collection of sounds and noises he unleashes on us/his toys/his mobile/the mirror every day and can even giggle now! He loves to put everything in his mouth, especially his hands. Every night, he soaks Nick and I with his splashes in the bathtub.

Henry has three sitters who watch him for a few hours each week. Of course, his favourite is still Annie, our good friend who watches him Sunday mornings so Nick and I can go to yoga together. It’s such a great Sunday ritual because not only does Henry get some playtime in with his crush, but it’s nice to be able to see her and do lunch every week!

A few weeks ago, Henry and I spent 5 days on our own when Nick’s trip to London collided with a New York snowstorm. Hank also managed to line up his latest leap with this trip which resulted in him only sleeping for 1 1/2 hours (or less) at a time. FOR 4 NIGHTS IN A ROW. We did a lot of co-sleeping that week, but Henry would still woke up crying and kicking me in the stomach. I was a zombie. Thank goodness for Lani coming to visit with Indian food one day and for one of my sitters showing up so I could go back to sleep for a few hours one morning!

The week after the sleepless week, something amazing happened – Henry finally dropped a night feeding! He would actually sleep from midnight to 4am. We decided he was finally ready to learn to sleep through the night. Luckily for all 3 of us, he caught on the second night! (I’ll save more about sleep training for a future post, after we’ve mastered napping.)

LIFE CHANGING, YOU GUYS. Oh, and since his sleep training coincided with his learning to roll over, this became his favourite sleeping position. I’m glad we stuck with the firm mattress/fitted sheet combo for safety’s sake, but every time I wake up at night, I check the video monitor to make sure he’s still breathing. (Oh, motherhood.)

Hank was rewarded handsomely for his new achievement with a toy donkey.

After telling everyone I was giving my self-employed self a Canadian maternity leave of one year off, I’ve decided to see if I could take on a social media client part-time. This seemed like not only a perfect way to acclimate myself with leaving him with sitters (working in the next room while someone you’re still getting to know plays with your baby is such an ideal way to do it!), but also a great opportunity to make sure I use my brain for something else I few times a week.

Also, I’m wearing jeans now and they are actually comfortable! Not as comfy as leggings, but they weren’t before I was pregnant either ;)

Henry’s newest favourite thing to do is to “stand” while we hold his hands or arms. Lying on his back is just not as fun anymore! Nick just put together his exersaucer and although he’s a little young to play with everything on it, he’s in awe of being able to stand up without us.

Stay tuned for even more photos, videos, and stories!

You are currently viewing the archives for March, 2014 at I want to go to there.