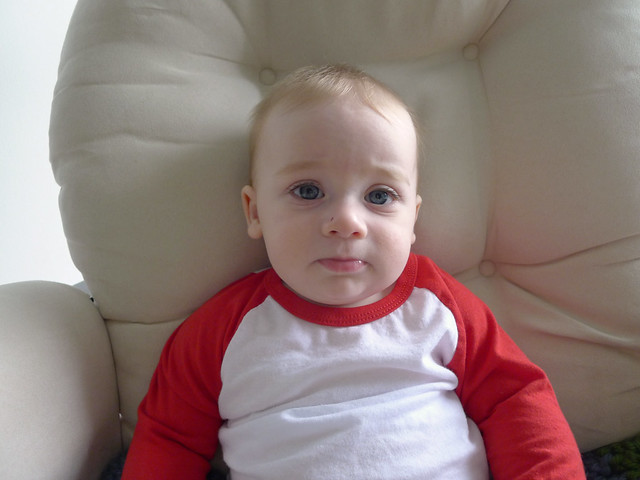 So here’s a crazy story that I haven’t told a lot of people. This is how my first Mother’s Day REALLY went…

Nick was out of town on a bachelor party trip for one of his best friends and was due to return the next afternoon. Henry and I woke up around 6:30 and I made myself some tea and oatmeal, as I have every morning for the past 6 months or so. Henry had just hit the 6 months old mark which meant it was really time to start introducing him to solid food. Our pediatrician believes in the “just go for it!” approach and give them everything except for honey. While she said that peanut butter shouldn’t be their first food, there’s no need to wait until they’re 3 years old to give them a taste.

Before I actually sat Henry down with a bowl full of his own food, I had been giving him tastes of things I would be eating at the time like hummus, avocado, tomato jam from a sandwich, and bits of my oatmeal, which I usually put apples, walnuts, and cinnamon into. Although I had given him a bit of plain oatmeal on this particular morning, apparently it was not far enough away from the walnuts or walnut dust, and within 10 minutes, his face broke out in red splotches! I noticed them appearing as I was changing his diaper. He was also getting the hiccups, but I didn’t know if that was related or not, but it certainly didn’t help.

So it was 7:00 am on a Sunday. I was alone in the apartment. My first thought was to call his doctor’s office, but of course they were closed. Their answering machine message said to hang up and call 911 if it was an emergency and I decided pretty quickly that my 6 month old baby having an allergic reaction to nuts probably was one.

There we were, just after 7:00 on a Sunday morning, welcoming firemen and EMS into our apartment while Henry smiles his hive-covered face. Luckily, he never stopped breathing and his mouth or tongue didn’t swell up. I really was hoping the 911 operator would tell me to use the Benadryl I had handy, but they insisted on sending help and taking us to a hospital. They don’t mess around.

By the time we got to the hospital (the one he was born at – kind of a funny Mother’s Day trip), Henry’s face had cleared completely. They took his vitals, which appeared to be fine. They gave me a prescription for an epi pen, just incase it happened again with a worse outcome. A couple days later, we had a follow up visit to his pediatrician who referred us to an allergist.

Just last week, Nick and I ate a dinner that included pine nuts in our kale salad. Henry had none of this, but was eating his bananas at the same time. Over 2 hours later, he woke up in his crib screaming, his face all red and puffy and nose stuffed up. We immediately blamed the pine nuts and gave him Benadryl which cleared him right up, but he slept in bed with me just incase.

Now we are keeping all nuts away from Henry, although Nick and I are kind of suspicious that maybe the last episode had more to do with teething and the cold he would end up getting the next day… Either way, we are both hopeful and worried. Does anyone out there have any advice or similar stories? We are looking forward to finding out what he’s actually allergic to during our appointment next month!

You are currently reading Aw, nuts. at I want to go to there.