For five years, I have been watching San Francisco’s Spoke Art Gallery put on annual Wes Anderson-themed art shows enviously. My favourite director PLUS really great art! When would I get the chance to see one?? 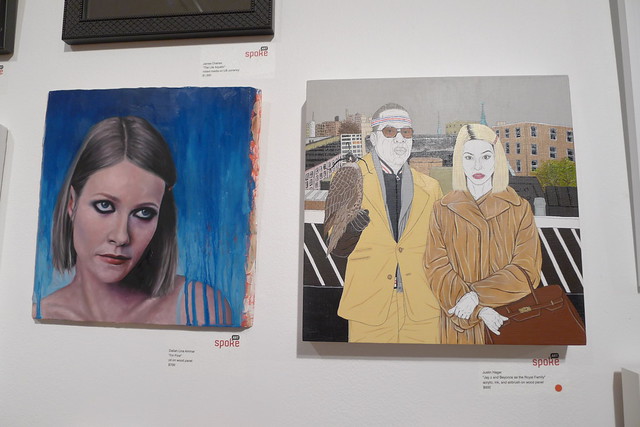 Finally this weekend, they brought their sixth annual Wes Anderson art show to NYC at the Joseph Gross Gallery. 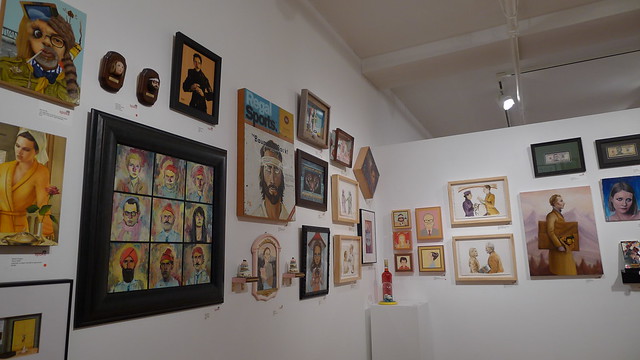 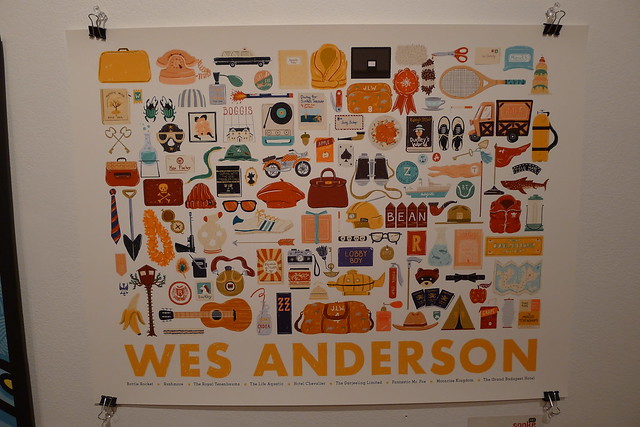 Needless to say, a babysitter was booked and I went to town on that show. 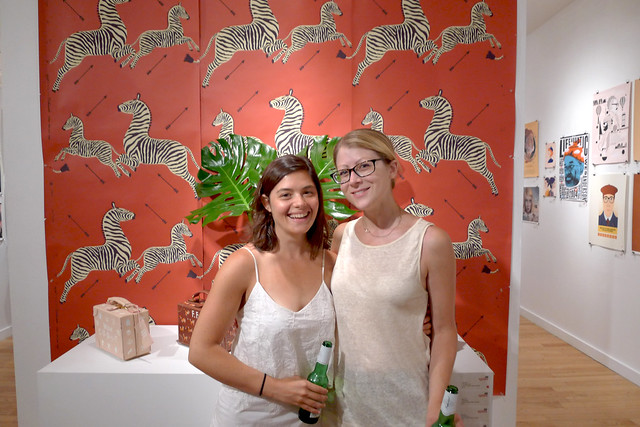 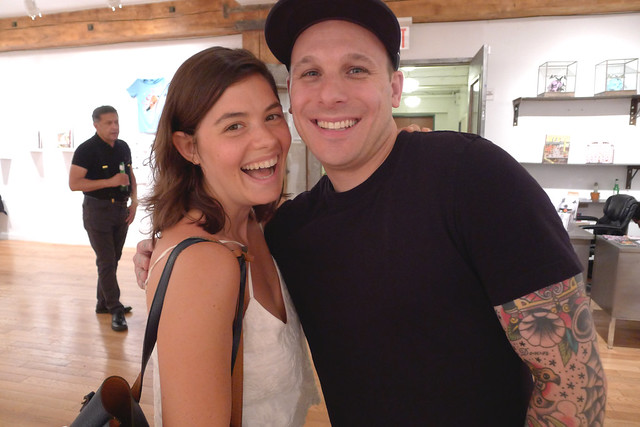 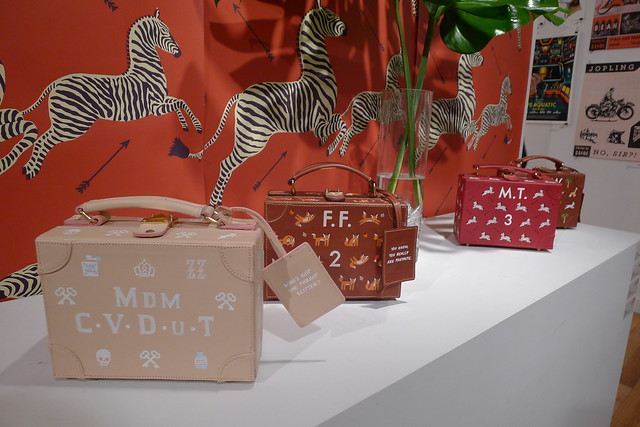 So many different mediums for appreciating the art in Wes Anderson’s movies! 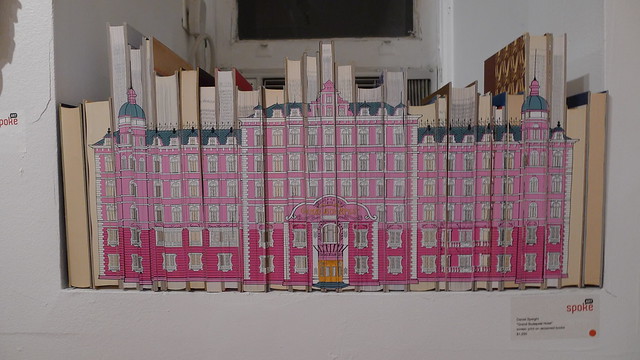 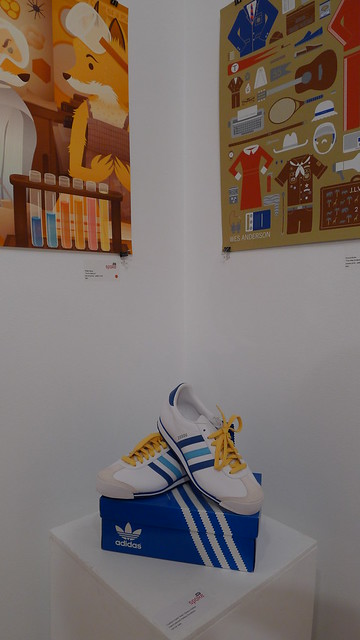 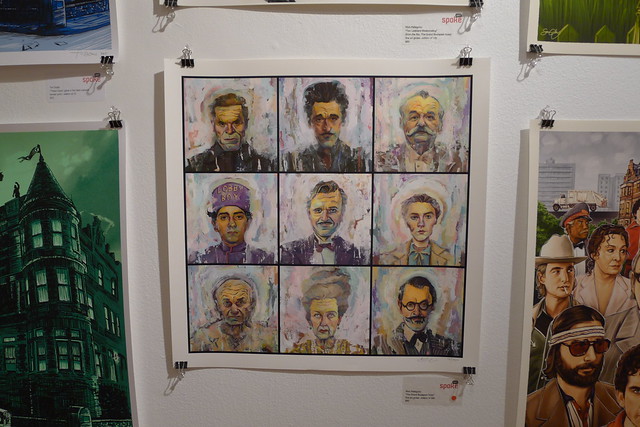 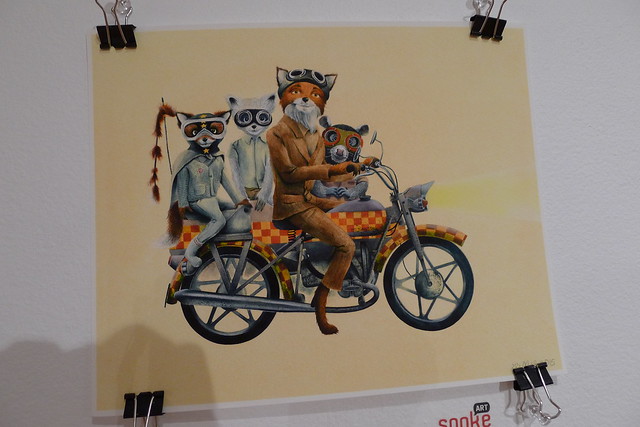 I really wanted this fantastic print, but alas, it was sold out already. No matter… 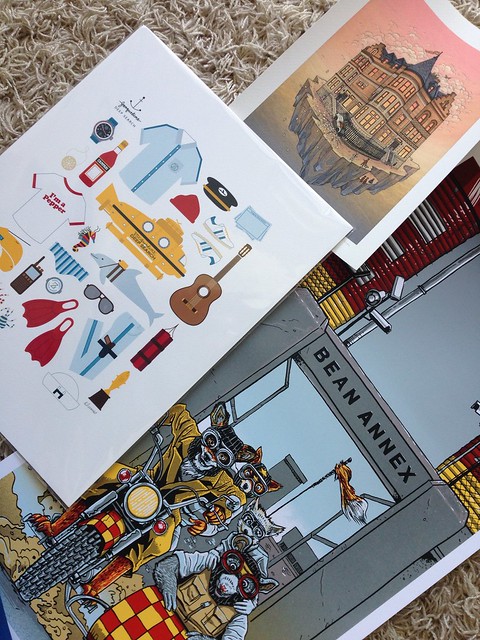 I bought these three instead! 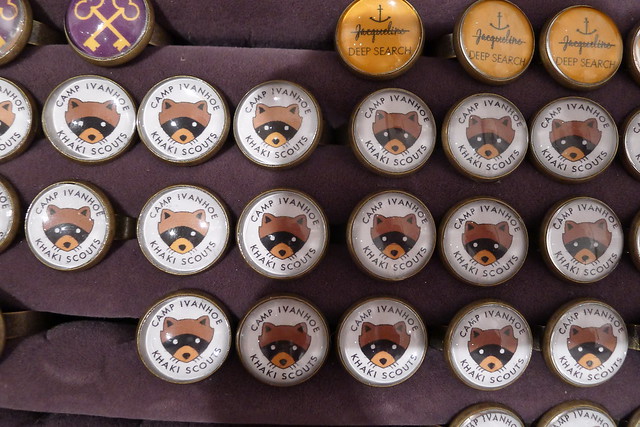 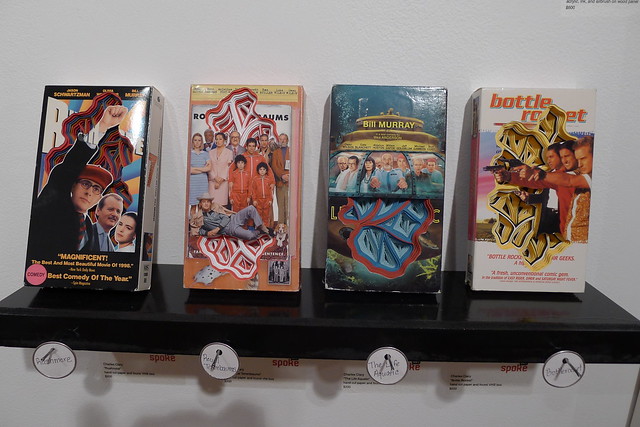 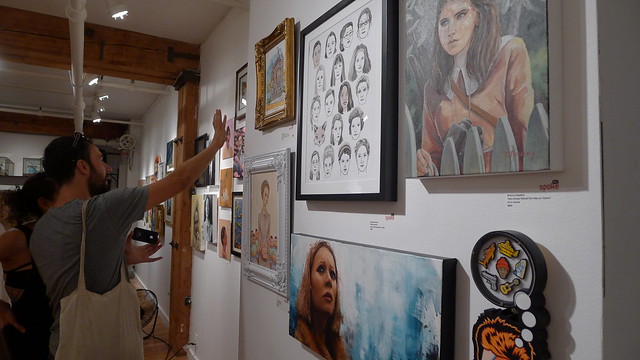 I could have just moved in to this space and lived there, surrounded by so many of my favourite things.

Thanks, Spoke Art, for finally bringing your Bad Dads show to New York and giving me an indisputable reason to go out on a Friday night!

Here are a few of my favourites.

After the sad news yesterday that Kumar Pallana had passed away at the age of 94, we get some good Wes Anderson-related news today. The gorgeous movie poster for Anderson’s next film is here and so is the trailer! Watch it NOW! My eyes are already salivating for its 2014 release.

And if you have a moment, read about Kumar Pallana’s amazing life. I only knew that he worked at a coffee shop in Texas and that’s where he was befriended and cast in movies by Wes Anderson and Owen Wilson, but there’s so much more!

Although I was invited to watch a black metal band with my husband last night in Manhattan, I opted for something much more suited to my interests, and right down the street. I went to a book launch and discussion with Matt Zoller Seitz, who just released a huge and beautiful hardcover book on Wes Anderson‘s movies at my favourite neighbourhood bookstore.

It was simply an hour of listening to his in-depth observations on Wes’ super detailed movies and then a Q&A after where he knew the answer to every question. He said he could have spoken about the music chosen for the movies for an hour alone (and I wish he would have!).

Matt was one of the first journalists/critics to embrace Wes Anderson’s movies, back when Bottle Rocket was struggling to find a distributor and couldn’t get into any film festivals. Since then, they’ve run into each other throughout their lives many times, including one morning in Brooklyn while on his way to work, Matt realized The Royal Tenenbaums was being filmed on his street.

Although the book was Matt’s project, Wes worked on it with him, providing him with a ton of behind the scenes photos, storyboards, sketches, and lengthy interviews about each movie. Here’s a peek inside…

This was the perfect birthday gift to me, from me :) Highly suggested for any Wes Anderson nuts out there!

After spending time in two different Swedish hotels in December, this new partnership with Marriott and Ikea caught my eye. The minimalist design with all the small perks you need – like wifi, cocktails, and light breakfasts – looks perfect. Although the new reasonably priced hotels are only going to be built in Western Europe as of yet, here’s hoping for another trip overseas to possibly check one out in person someday!

You know those middle-of-the-winter blues? The ones where you spend your weekends eating too much, drinking too much, or just deciding to tattoo the inside of your lip on a whim? Well despite keeping pretty busy this month, I still managed to find time to get bored, and how did I combat the boredom? By taking this weekend’s most popular app “imadeface” and turning it into a game.

Sarah was my opponent. After creating pretty accurate cartoon versions of ourselves and our friend Karen, we decided to pick a friend to animate, then share our interpretation of said friend at the same time. The results were pretty funny. I hope the friends we cartooned appreciate this and know that we chose them because of their pretty faces.

It’s funny how to a stranger, these could look like completely different people, but to someone who knows the subject, there’s different features in each interpretation that ring true. I think Sarah won the game, unless anyone can argue otherwise! The imadeface app is available for free in the iPhone app store.

A Weekend Trip To Sweden

Sure, it sounds a little crazy to take a weekend trip to Sweden, especially the weekend before we fly to Canada for Christmas, which is followed immediately by a New Year’s Eve trip to Paris, but we did it anyway! Why? Because there’s only a few weeks left in The Year Of Yes and we’ve got to make it as incredible as possible.

Nick and I took the 6pm flight from Newark on Thursday, which landed us in Stockholm at 8am Friday, Sweden time. We took the very speedy and enjoyable Arlanda Express train from the airport to Stockholm City and enjoyed a 20 minute ride with views of snow and snow-covered trees.

We immediately checked into our hotel which was walking distance from the train station, and after barely sleeping on the plane ride there, fell asleep for a couple hours. When we woke up around 2:00, we realized from the amazing view from our room that the sun had begun to set. Apparently the sun sets at about 2:45pm in the winter there! This was an interesting addition to our bodies’ confusion of what time it was.

We decided to venture out and find some lunch/dinner/breakfast/whatever meal it was supposed to be at this point, and found this great area full of shops.

Oh, Conor Oberst is big there too.

Even though I felt like I should be eating meatballs and lingonberries, we ended up eating fajitas. 500 dollar fajitas! Just kidding, it was 500 kronor. $1 USD = roughly 7 kronor. Which means these fajitas were still pretty expensive.

We left our meal and decided to explore the shops. Then it started snowing!

Found a mall with some great stores, including an awesome designy-type, full of fun trinkets.

Including the “i-Woody” wooden iPhone for kids. Made by “Donkey”.

I loved being able to shop at Vera Moda! As soon as I saw a giant photo of Alexa Chung outside the store, I knew it would be good.

We relaxed in our hotel room that night – our very Swedish, subtly well-designed hotel room.

And enjoyed being dressed in matching flannel.

Saturday’s outfit. I was so glad I packed my Tretorn boots. We got up fairly early to say goodbye to Stockholm and take the train to Linkoping.

The train stations and airports in Sweden are awesome. Very clean and modern, with great and subtle design. This room was designed to be an “oasis” to relax in while you were traveling. It played bird noises from speakers so it sounded like you were in a rainforest.

Maybe we could go to Uppsala instead to visit Lisbeth Salander and Mikael Blomkvist?

Nope, we are going to Linkoping to see Nick’s band, Ghost!

They were debuting their new stage show with the new (but equally terrifying) priest outfit.

Hard to see, but the “white Papa” priest was saying goodbye to unveil the new “black Papa”. Their fans went bananas. It was interesting to experience a show in Sweden. Although a show full of metal heads, everyone was pretty respectful and well-behaved. Swedes are awesome. And also really good-looking.

After the show, we went to the after party, but only after hanging around the venue after the show had ended for way longer than expected. We both knew we weren’t getting a decent sleep since we had to leave our hotel at 5:30am to head back to Stockholm for the airport. We just went with it and ended up talking Batman with the singer of Watain while he tried (unsuccessfully) to get me drunk on gin.

(Beer can-filled snowbank in front of the venue)

And just as quickly as we arrived in Sweden, we left it, landing back in New York around 1:00pm. Nick and I are both so grateful for the opportunity to visit, even in our overtired state. We would love to visit again someday!

You are currently browsing the Art & Design category at I want to go to there.